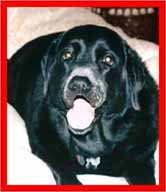 Our Breezy was welcomed into our lives six years after Onyx. She was eight weeks old and won our hearts immediately with those big sad brown eyes and big floppy ears. Her nickname became "Sugar" as she was just so sweet. Where Onyx liked to run and play, Breezy would let Onyx run for the toy then take it and lay down. She was the most beautiful couch potato with the biggest heart and sweetest nature. If Breezy had a bone, she was so content and happy and it just made us relax as well. She never growled, but loved to sing. If you started her off she would continue howling (her form of singing) which would make everyone smile and laugh.

Unfortunately at the age of five we found a lump on her mouth. It became a nightmare for us but she just stayed as sweet and loving as always.

She was diagnosed with a mass cell tumor and given a very grim diagnosis of approximately six weeks.

Our third opinion at the University of Pennsylvania gave us some hope. With treatments of chemo and radiation three times a week, for months, our sweet baby was given 2 1/2 extra years. We took them as the best "gift". Though everything, she went through, she always had the best attitude. She engraved a special place in our hearts with her courage and will to live. She was an inspiration to everyone that was lucky enough to know her.

Our baby finally gave in and died in Wanda's arms at the age of seven. Even at her death she was with the people that loved her and she left us content.

There is not a day that goes by that we don't think and reminisce of both our beautiful babies who will forever live on in our hearts and through The Onyx & Breezy Foundation.